“BECAUSE WINE IS MY FIRST LOVE, LET ME SHARE WITH YOU THE ART PIECES OF MY PERSONAL SELECTION, THEIR HIDDEN SECRETS, DELIGHTFUL PLEASURES AND ETERNAL VALUES”. 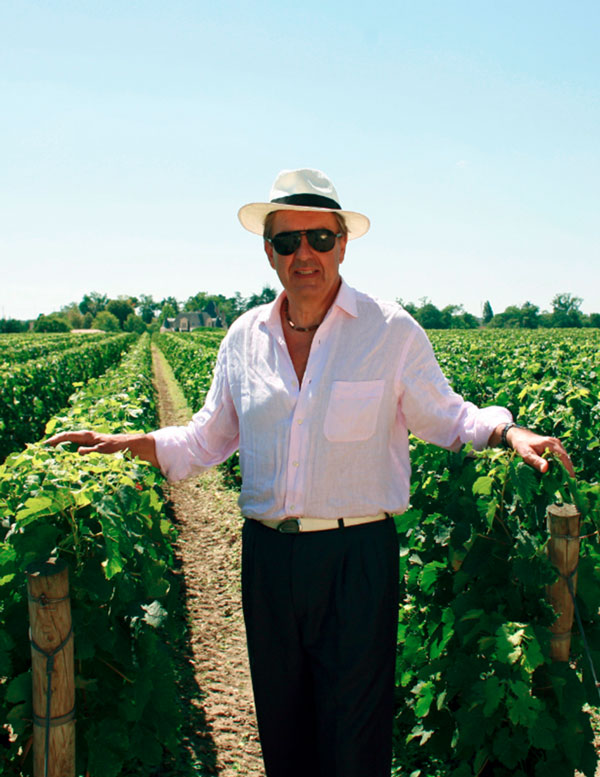 Philippe Charriol, a devotee of art and history, puts his talent at the service of wine and selects for you the very best French wines.

Wine is running in the Charriol’s family veins, since the 19th century. The CHARRIOL family originated from Bordeaux in the first part of 19th century.

Around 1850, Joseph CHARRIOL started importing wines from Bordeaux in Calcutta, INDIA. A century later, Philippe CHARRIOL’s first love brought the CHARRIOL family back into the wine business, as he was engaged to the daughter of an important wine grower in Patras, GREECE.

Philippe then went back to Paris in 1970, to head the Export Department of AGRIVIN, one of the leading wine dealer in Europe. During this time, Philippe learned wine tasting at NICOLAS, which was the world’s largest wine retailer at this time.

Life took him away from wine and into Luxury goods, when he launched the CHARRIOL brand of swiss watches in the early 80’s. Philippe rediscovered his passion for wine during a trip in Jurançon, as he got married with a land Lady of Jurançon wine region. This rekindled his interest for the most unique French wines.

However, during all these years he remained a fine connoisseur for all his friends and colleagues and built exclusive wine cellars in all his residences around the world, filled with the best Bordeaux, Burgundy, Champagne, Jurançon ...

Philippe CHARRIOL is thrilled today to bring his knowledge and share his true passion to the Chinese consumers, who are delighted to appreciate and savour the finest wines from France. Already available, find here, three wines from my ancestor’s region BORDEAUX.

Château Carignan is located at Carignan de Bordeaux, 10km to the east of Bordeaux, one of the most delightfull château architecture from the region.
The Premières Côtes de Bordeaux AOC (Appellation d'Origine Contrôlée) was defined by the French government in 1937 (3,400 hectares) spread over 37 communes on the right bank of the river Garonne, forming a narrow strip of vineyards some 60km long and 5km wide.

Temperate oceanic climate, combined with the proximity of the Garonne River, provides a favorable balance for the cultivation of our vines.

The dominant grape variety, as for the other right bank Appellations (Saint Emilion and Pomerol), is Merlot.
This variety is in its element on the clayey limestone hillsides and offers supple, well-rounded and highly fruity wines.
(65% Merlot, 25% Cabernet Sauvignon and 10% Cabernet Franc).
30% of the vineyard is over 40 years old and 70% between 8 and 25 years old.

The Lord's domain of Carignan first appeared on registers in the 11th Century and was built on the site of a Roman villa.
It was a gift to Jean Poton de Xaintrailles from Charles VII, king of France. Poton de Xaintrailles, a companion in arms of Joan of Arc, built the present castle in 1452 and one year later crushed the English army led by Connetable Talbot at the battle of Castillon, thus putting an end to the Hundred Year War, enabling the Aquitaine region to return to French rule.

He subsequently became Governor of Aquitaine and, with the judicious help of Bishop Pey Berlan from Bouliac, put down the beginnings of a civil war in Bordeaux between partisans of the English and the victorious French troops.

Château Carignan was called Motta-Verta initially and was renamed Talence in the early 16th Century.
Among the successive owners were some illustrious families including the Canteloups, Géres, de Vallier and Jean Dubernet, who upon his death in 1652 left the property to one of his daughters who married Jean Baptiste Gaston de Secondat, baron of Montesquieu, lawyer at the Parliament of Toulouse.

In 1689, the year that the future writer and philosopher Charles Louis de Secondat was born, the estate was sold to the 'De la Devise' family. They later sold on to the Cursol family who lived on the estate until the early 19th century.

In 1814 General Etienne Donna, aide-de-camp to Joseph Bonaparte, bought the property and his family later sold to Mr. Honoré Picon in 1892.
His heirs sold to André Abadie in 1940. Philippe Pieraerts bought the estate from the latter’s heirs in 1981.

The estate is now the property of Mr Andy Lench since the end of 2007.

TO SERVE WITH: Perfect accompaniment for all meats and Peking Duck or Roasted porc, or also with ripened cheese and or chocolate cake.

TEMPERATURE AND PRESERVE: Between 16 and 18 , decanter 2 hours before. Can be preserved during 15 years

TASTING NOTES: A deep red color. To the nose, different notes of toast, coffee, vanilla and leather on riped black berries. To the mouth, a full-bodied wine, rich with spicy notes, fleshy but not excessively, well developed tannins and long to the finish, 13,5% of alcohol/vol.
• Gold Medal in 2010 at the ‘Concours des vins de Bordeaux’
• Bronze Medal in 2011 at the ‘CHINA SOMMELIERS WINE CHALLENGE’